Ferrari has entered a new era; one in which greener and more sustainable technology will be used to power its mainstream supercars. The latest of these is the new 296 GTB, the name derived from the new 2.9-litre V6 engine, placed between the driver and the rear axle. This is the first use of a V6 in a production car with a Ferrari badge on the nose, and the 296 GTB gets a plug-in hybrid system with an all-electric mode. To go on sale alongside the F8 Tributo, which will likely go out of production in 2022, the 296 GTB is expected to be in Indian showrooms by mid-2022, and will come at an expected price of Rs 5.7 crore.

The design just works. Ferrari has returned successfully to the clean but voluptuous look earlier adopted for its mid-engine cars. The designers have used a combination of a sharp nose, a visor-style windscreen and muscular rear fenders, with typically Ferrari flying buttresses flanking the engine. They help with rigidity and help give the roofline a smoother profile. 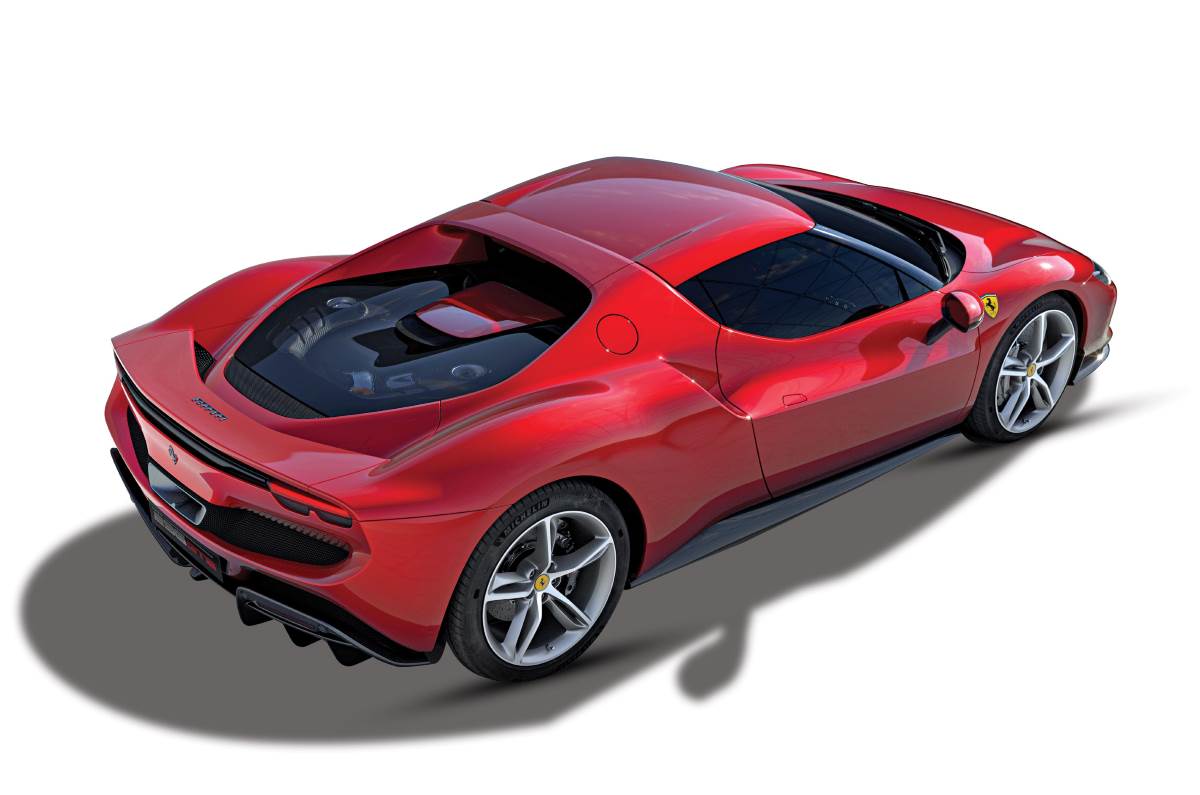 The nose is particularly crisp, with a deliciously clean profile that makes it look very rakish. The protruding chin works as the perfect base, and rather than stick with the vertically aligned headlights seen on earlier mid-engine Ferraris, the 296 GTB gets all-new horizontally aligned ones, similar to the SF90. Along the side, a sharp crease runs down the door, linking the front to the rear, and the bulging rear fenders are reminiscent of the 250 LM from 1963. The design of the rear again is clean and neat, save for another 250 LM-like touch – an integrated spoiler that juts out at the rear. Interestingly, the 296 GTB can also be bought with optional carbon-fibre wheels that are 8kg lighter than the already light forged ones.

When it comes to aero, Ferrari has, for the first time, used an active aero device for generating downforce, rather than reducing drag. The active rear spoiler is said to generate up to 360kg of downforce at 250kph, if you opt for the Fiorano track pack. The car also uses ‘Aero’ brake calipers, which are cooled via ducts integrated into the headlights.

Propulsion comes via an all-new, 120-degree, 3.0-litre, twin-turbocharged V6 that produces 663hp; the equivalent of 221hp per litre – a record for a production car. The turbochargers sit between the cylinder banks, which yields compact packaging and reduced engine mass. Despite being turbocharged, the V6 is claimed to emit “high-frequency notes of a naturally aspirated V12.” Ferrari engineers, in fact, are said to refer to the new F163 engine as the “little V12”, due to its distinctive sound. Its redline of 8,500rpm, incidentally, is shared with the V12 in the 812 Superfast. 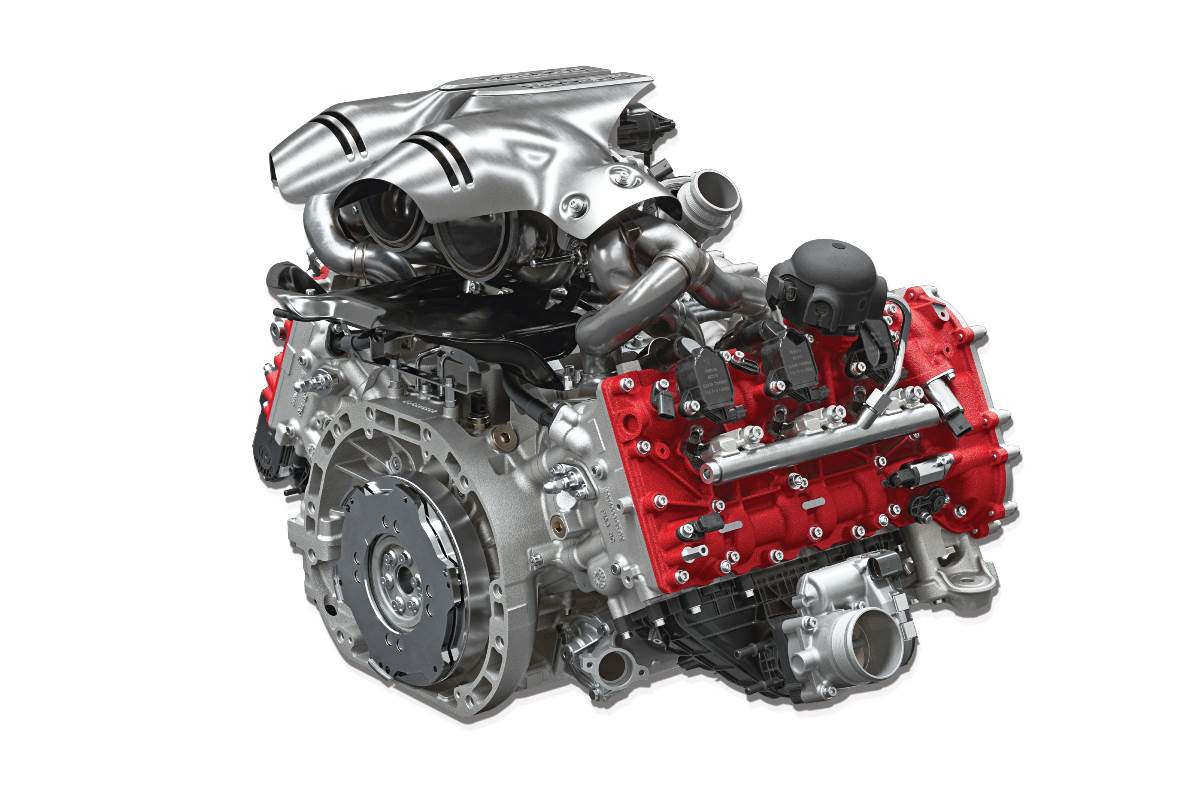 The electric motor that makes up the hybrid system produces a healthy 167hp, taking the system’s combined output to a huge 830hp. That’s roughly 110hp more than the V8-powered F8 Tributo. The 296 GTB can also be driven on electric power alone for up to 25km and up to 135kph). Four drive modes can be engaged via the ‘eManettino’ switch on the steering wheel – eDrive, Hybrid, Performance and Qualify, each with differing degrees of electric motor drive.

Ferrari claims the 296 GTB is also its most fun-to-drive car. Handling is said to be go-kart-like, with lots of new tech and many other factors contributing.

Chief among these is the fact that it has a 50mm shorter wheelbase than the F8 Tributo. And while there’s no carbon-fibre tub, something rivals have, the car still has a dry weight of 1,470kg – just 35kg more than F8. In addition to Ferrari’s Side Slip Control (SSC) that helps control slides, there is now a second device that feeds off data from the power steering. The latter cross-references information and helps quicken the all important ‘grip estimation’ by 35 percent. The 296 GTB also features a six-way Dynamic Chassis Sensor, (claimed to be the first used on a production car) that improves the accuracy of the data collected in various driving scenarios. There’s also a new ‘ABS Evo’ brake-by-wire function that reduces brake pedal travel and ensures shorter braking distances by around 8-9 percent. The ABS Evo system has no yaw-rate sensor, as it too measures acceleration and speed across three axes to better determine when to intervene, especially under high cornering loads. 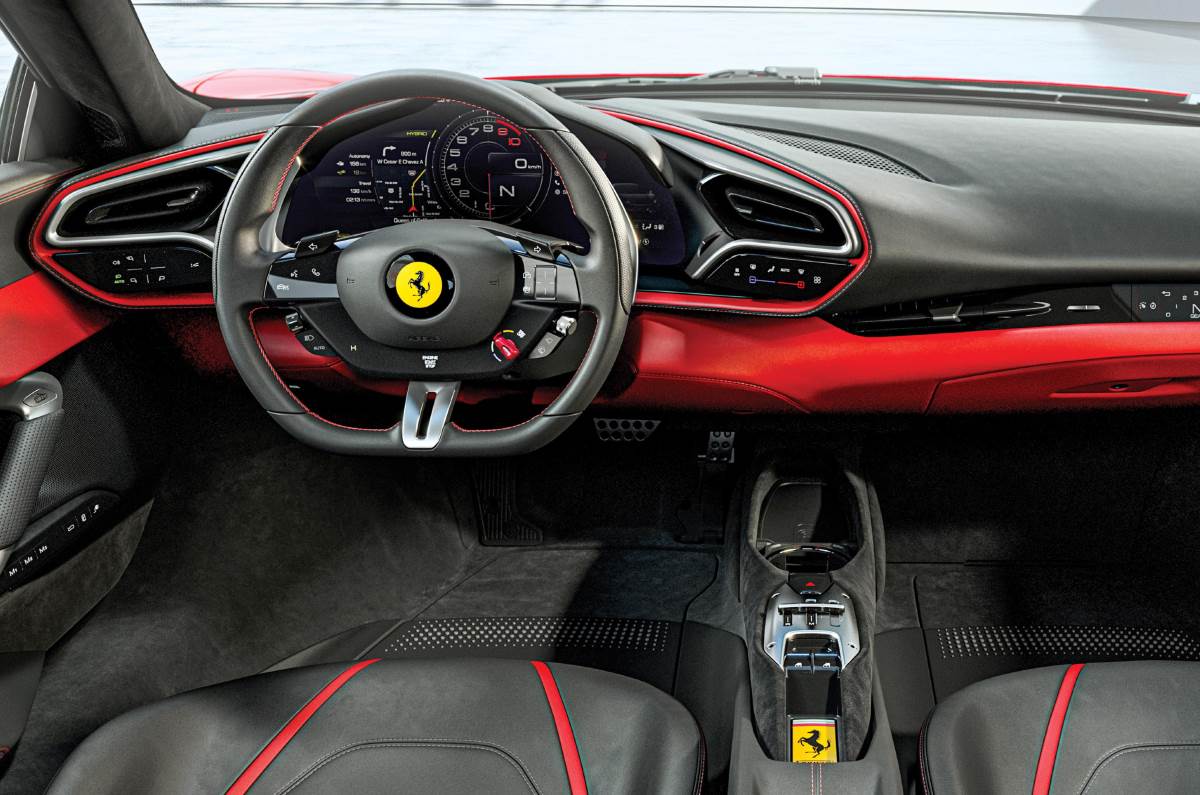 It’s a very focussed driving environment on the inside, with few distractions.

The 296 GTB also gets a digital cockpit. A concave dashboard section houses the digital instrument panel and the steering wheel has capacitive touch controls for many of its functions. There’s no central touchscreen, as in the Roma, but Ferrari has used a stylised version of the classic ‘double H-gate’ design to control gearbox functions.

While many will miss the character of the V8 engine, there’s little doubt that the 296 GTB, with its Formula 1-derived tech, potentially offers a lot more. Greater straightline performance, more agility from the chassis and, as Ferrari claims, more driver engagement and a go-kart-like feel.

You may have missed

Punit Goenka persevering with as MD publish merger with Sony could also be a good suggestion: Abneesh Roy